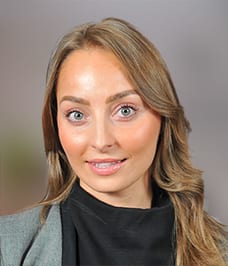 Awarded Rising Star of the Year at the 2018 Yorkshire Legal Awards, I go the extra mile for all my clients, adopting a professional and caring approach to get the best result. I practice all areas of family law with a special focus on divorce law and children matters.

Charlotte completed her LPC in 2014 and received distinctions in all subjects. In 2013, she graduated from Leeds University with a first class honour degree in law.

During her final year of university, she was diagnosed with cancer. Since being in remission, she was appointed as an ambassador for the Teenage Cancer Trust. As the public face of the Trust, she was presented with several great opportunities, one of which was speaking to an audience of over 5000 per night at the Royal Albert Hall in London.

The role also took on an educational platform, as she has spoken in schools around Leeds about her experience.

Charlotte was awarded Rising Star of the Year at the 2018 Yorkshire Legal Awards.

Charlotte is an avid fundraiser, and although most of her efforts are on behalf of the Teenage Cancer Trust, she also speaks at events for other charities all over the country. Consequently, she was voted “Female Personality of the Year” at a local award ceremony, and has also been nominated for the Yorkshire Young Achiever award.

When she’s not assisting her Leeds family law clients or working on her legal and charitable endeavours, Charlotte enjoys dining out, spending time with loved ones, socialising with friends and loves to write poetry.

Charlotte Newman was supportive, professional and made the stressful process of divorce and child custody less daunting. She was available when I needed her and I couldn't be more grateful for all her help. I would highly recommend!
Client: Mrs O
I found every step of the engagement with Stowe to be top notch, from initial phone call enquiry to the guidance provided. For me, the key to all guidance is that it's clear and understandable, which Stowe delivered without question. My sincere thanks to Charlotte Newman who I found to be excellent.
Client: Mr T
Charlotte Newman is an excellent Solicitor who provided great insight and valuable advice to me when going through an extremely difficult and emotional divorce. Charlotte was on hand to listen and showed great empathy during the process, Charlotte also got me the best support from Barristers too, who made life easier in court. Despite this been a very difficult period I am grateful to Charlotte for treating me as a friend not just a client and providing me with the strength to move forward. Charlotte's advice helped me secure the shared care arrangement I sought to ensure I remained an influence in my children's lives.
Client: Mr F
I was recommended Stowe Family Law some 15 months ago when I was going through a difficult divorce from my estranged wife. Although we had a prenuptial agreement in place it required some professional advice to execute it reasonably. From my first meeting with Charlotte Newman I knew she would act in my best interest but also handle this sensitive topic with compassion and understanding. Not only was Charlotte extremely professional but she also emotionally supported me during this difficult period and made the process as painless as possible.
Client: Mr D
12 months ago I was faced with the sudden and unexpected end of my 23 year marriage. In a state of complete shock, I needed professional advice I could rely on to achieve the best possible outcome for myself and my children. From the onset, Stowe Family Law, represented by Charlotte Newman, provided me with not only the highest professional services but also a sensitivity to my situation which enabled me develop a confidence and trust in her proficiency, that I believe ultimately lead to an overwhelmingly successful outcome in my case. Charlotte is a dedicated and driven family law solicitor, who was always supportive and quick to respond to occurrences that arose with precisely the right amount of momentum needed to move matters forward appropriately. She has an extensive knowledge of family law and I can not recommend her highly enough. I will be forever grateful for all she has done.
Client: Mrs S
I received a fantastic service from Stowe Family Law. Miss Charlotte Newman assisted throughout my family matters emotionally and professionally through a very difficult time. Her expertise and high standard gave me the outcome I hoped for. I will be forever grateful. I would definitely recommend Stowe Family Law they excel in family matters.
Client: Mrs B
We approached Stowe Family Law to deal with divorce proceedings. Charlotte Newman was appointed as our solicitor and throughout she was fantastic. Very knowledgeable, helpful and behind us 100%. We couldn't be more grateful for help in matters and we were delighted with the outcome. We certainly recommend Stowe Family Law given our experience.
Client: Ms B