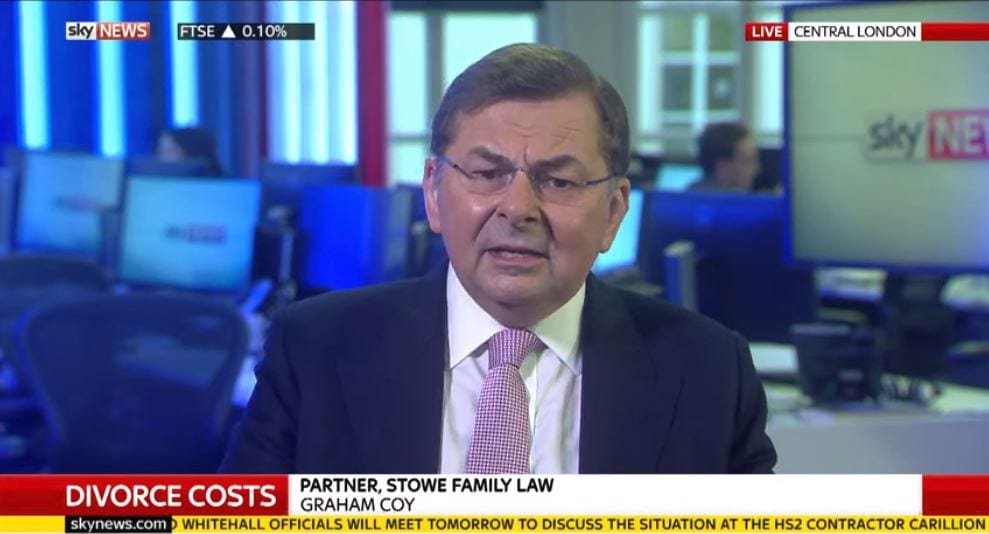 Stowe Family Law Partner Graham Coy made his return to Sky News this afternoon. He was there to discuss a recent report that puts the total cost of divorce at between £14,000 and £14,500. This number includes legal fees, finding a new home and things such as gym memberships or new clothes.

Graham said that while there were many factors in this apparent rise in divorce costs, one of the biggest is the “scandalous” cuts to legal aid introduced by the previous coalition government. He said that without this lifeline, many people cannot afford legal representation and some of them are choosing to represent themselves, which is very difficult.

Citing research from the United States, Graham explained that divorce was the second most stressful event a person can go through. It is second only to the death of a child or partner. To reduce the amount of stress people experience they really do need good advice from specialist lawyers, he insisted.

Without a specialist lawyer, many people miss out on less stressful – and usually faster – ways to get a divorce than going through the Courts such as mediation, collaboration and arbitration, Graham said.

He claimed the court system in the UK was in crisis, adding that the government should really take a look at how it works because it is currently unaffordable for many people. It appears as though we are moving towards a state of affairs where only the very rich can afford to go through court proceedings for their divorce.