So much for transparency

5 tips for Father’s Day without the kids

Child Arrangements Orders - what you need to know

On the 16th of January 2014 the then President of the Family Division Sir James Munby issued what became known as his ‘Transparency Guidance’. As we were told in the first paragraph, the Guidance was “intended to bring about an immediate and significant change in practice in relation to the publication of judgments in family courts and the Court of Protection.”

The basic, albeit (as we will see) flawed, concept behind the Guidance was simple: publish more family court judgments, in order to counter the commonly-held view that the family courts operate a “system of secret and unaccountable justice”. The idea being that if more people read judgments they would better understand exactly why the family courts make their decisions and operate in the way that they do. At one fell swoop, the populace would realise that the courts are neither secret nor unaccountable, and did, in fact, work in the best interests of those affected by their decisions, in particular, the children.

Or at least that was the theory.

In another life, I collect almost all published family law judgments that are freely available online and provide links to them, for anyone who is interested. I have been doing this since 2009. I admit I may miss the odd judgment, but I think I pick up most of them, certainly on the Bailii website, which is the main source of freely available law reports in this country. I have put together details of the number of links to family judgments that I have published every year since 2013, the year before the Guidance was published. Obviously, 2019 is not yet over, but as I write this I have published links to 333 family law judgments so far this year. With a quarter of the year to go, I have extrapolated that to 444 for 2019.

The pattern is clear, as will be seen from the following graph. 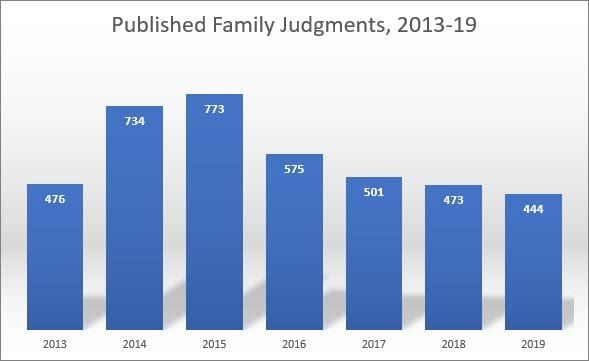 As you can see, the Guidance had an immediate effect, raising the number of published judgments from 476 in 2013 to 734 in 2014 and to a peak of 773 in 2015. However, since then enthusiasm for transparency amongst the judiciary has clearly waned, with the number of judgments published now at, or even below, pre-Guidance levels.

It does seem that Transparency Guidance is now a dead letter.

The experiment has failed. Whether that is because judges are simply too busy to go to the trouble of publishing their judgments (it can involve a lot of work, in particular ensuring they are properly anonymised, where required), whether they have just lost enthusiasm for the project, whether they see it as a futile waste of time, I don’t know. Maybe there is some other reason.

Whatever, I see no real evidence that the publication of more judgments made any significant difference to the public understanding of the family courts. And I follow family law more closely than most. I am quite sure that family courts are mistrusted by at least as many people now as they were five years ago.

And it was surely only ever wishful thinking that more people would actually read judgments. The events of last week proved once again that judgments of courts, even the highest court in the land, are not read, even by those who really ought to read them. The chances of the average ‘corrupt family courts’ conspiracy theorist actually reading a family court judgment are slim indeed.

The transparency experiment is over. It’s time to move on.

For what little it is now worth, the Transparency Guidance can be found here.

John Bolch often wonders how he ever became a family lawyer. He no longer practises, but has instead earned a reputation as one of the UK's best-known family law bloggers, with his content now supporting our divorce lawyers and child custody lawyers

As the UK's largest family law firm we understand that every case is personal.